I visit the bookmarks in my browser one day, as I normally do, scrolling through the numerous gateways to my explored treasures of the Internet. Scrolling down and scrolling back up and there at the top, something catches my attention. It’s one of my first bookmarks, a link to a website titled – ‘Flat design vs. realism‘. By mere glance, all these snapshots flashes before me.

It was a battle. Back in 2013, when the Internet junta fought over the fate of it. Will flat design finally overshadow realistic 3-D rendition or will the later continue to dominate? It was the time when the websites finally bow down to the king of interfaces.

Don’t worry! I’m not going to give a lecture on ‘Effective UI building – the history & the future’. Nope.

Anyway, I must tell that the website was fun to scroll through. I couldn’t find the live site URL, so here is something from the archive.

There was an actual fight – you pick the side, you want to fight for. 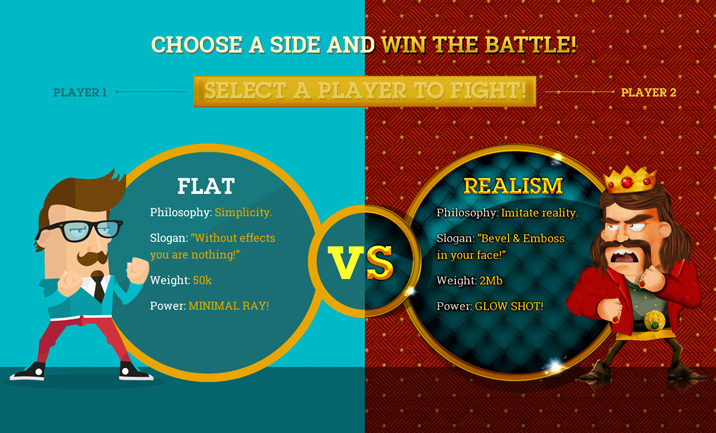 But here’s the thing that I want to emphasize through this whole build up – both of these sides were equally powerful on their own to dominate the Internet UI space. Both of them had their own pros & cons (one having more than other) and each of them had their following (once again, one having more than other). But at the end, only one has to stay.

Few days ago, I was confronted with a similar choice. But unlike previous time, it was my personal career at stake. Before graduating from college, I was working in this newly inaugurated incubator space called ‘Center for Healthcare Entrepreneurship’ as a technical assistant to the fellows. I started out as an intern (pioneer batch technically) and stuck to it throughout my final year.